Inflation Rises a Little as Expected in February 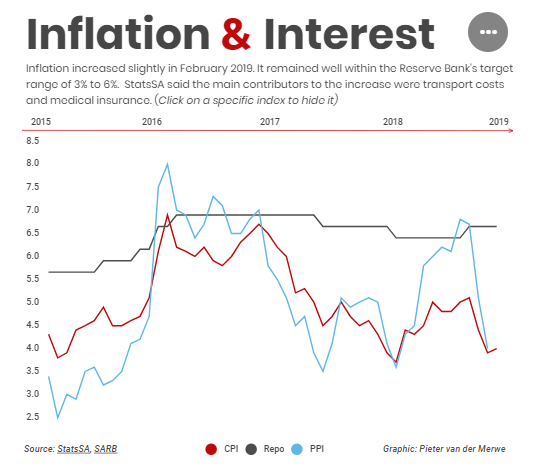 Consumer inflation rose 4.1% year on year in February, in line with market expectations — a slight increase on January’s 4% growth

28 March 2019: Consumer inflation accelerated slightly in February to 4.1% year on year, remaining below the mid-point of the Reserve Bank’s target range of 3%-6%.

Core inflation — which strips out volatile items such as fuel and food — rose 4.4% in February, unchanged from the previous month, Statistics SA said on Wednesday.

Statistics SA’s miscellaneous goods and services category — which covers items such as insurance or personal affects — registered the fastest rate of increase, growing 5.6% on an annualised basis,

Consumer inflation decelerated to 4% in January, lower than the markets’ forecast of 4.3%. It measured 4.5% in December.

Inflation, as measured by the annual change in the consumer price index (CPI), is the key measure used by the Reserve Bank’s monetary policy committee (MPC) to set interest rates.

Wednesday’s figure is well within the Bank’s target range, with subdued inflation and a more dovish tone by major global central banks in 2019 raising hopes of the Bank holding off on more increases for now.

Investec economist Kamilla Kaplan had said last Friday that inflation was being kept in check by the slow pace of SA’s economic recovery. Consequently, there was no evidence of demand pressure on prices, and cost-push pressure on price also appeared to be contained. Source (BDFM) https://www.businesslive.co.za/bd/economy/2019-03-20-inflation-rises-a-little-as-expected-in-february/