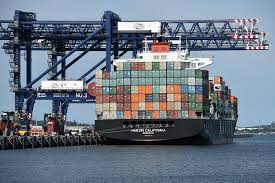 1 April 2019: SA recorded a trade surplus of R3.99bn in February — a rebound from the seasonal deficit recorded in January.

February’s surplus was attributable to exports of R98.14bn and imports of R94.15bn, data from Sars showed on Friday. This was slightly better than expected, with the Bloomberg consensus for a surplus of R3.3bn.

Compared to last year, the surplus was also an improvement, with a deficit of R0.85bn recorded in February 2018. January’s deficit was revised down to R13.06bn from R13.08bn.

Exports typically lift in the month of February following the seasonal decline in January. However, the extent of the increase in exports has been tempered by a global slowdown in goods trade.

The balance of trade is an indicator of the difference in value between a country’s imports and exports and dictates SA’s current account, which is indicative of SA’s trade with the rest of the world.

The figures are notoriously difficult to predict and analysts stress that it is important to look at trends. Source (BDFM) https://bit.ly/2FOLA1O