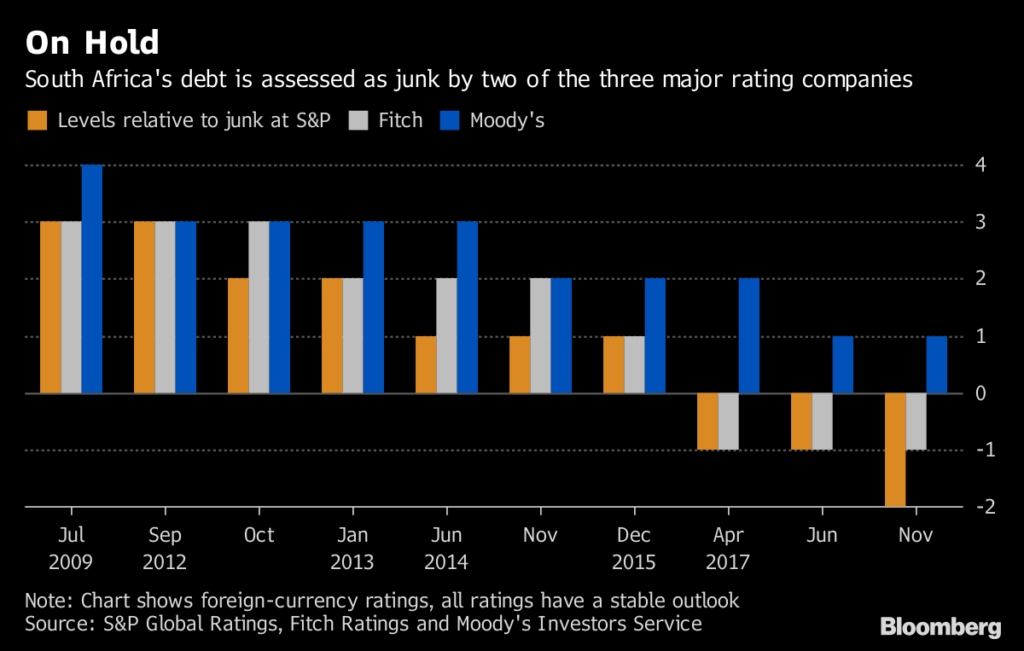 26 March 2019: Eyes are on two big economic events this week, with the South African Reserve Bank’s Monetary Policy Committee (MPC) set to meet over rates, followed by a review from rating agency Moody’s on Friday.

According to Intellidex analyst Peter Attard Montalto, while the view is that rates will be kept stable, the MPC could be moving back into a more hawkish view of the economy, following a more neutral stance in January.

Eskom remains a risk that needs to be factored in, as is the slowing economy and rising prices – particularly electricity and fuel hikes coming in April.

Intellidex sees rates being held, with a hike likelier at the end of the year, after a negative Medium-Term Budget Policy Statement.

According to economist John Ashbourne, while inflation rates have been well below the middle point of the Reserve Bank’s target range (4.5%), electricity and fuel hikes coming in April will put this under pressure.

However, while most economists have a rate hike pencilled in for the end of the year or the start of 202, Ashbourne expects a rate cut, spurred on by tepid growth and low inflation.

Intellidex only sees a cut happening under very specific circumstances, like if the longer-term inflation remains at the lower end of the range, or if the risks attached to a ratings downgrade is somehow shifted to the risk of hikes.

“It’s clear we are not in this situation,” Attard Montalto said.

Ratings group Moody’s is expected to deliver its review of South Africa’s sovereign on Friday, 29 March.

It is currently the only major ratings agency that has South Africa at ‘investment grade’ – one notch above junk – with a stable outlook.

S&P and Fitch both downgraded SA to junk status in 2018, in response to the surprise cabinet reshuffle and an unfavourable mid-term budget in October 2017.

Economists have characterised Moody’s resistance to downgrade South Africa as an act of kindness, and is often said to give the country the “extreme benefit of the doubt”, when all economic markers point to a sovereign that should be in sub-investment grade.

Chief economist at Efficent Group, Dawie Roodt said that the ongoing power crisis and lack of clear plan on Eskom could very well push the ratings firm to reverse this position.

“I know at the moment that they have a neutral outlook, but that doesn’t mean that they cannot downgrade us,” he said. “Moody’s could give a negative outlook, but I think chances are we will see a downgrade.”

PwC economist, Lullu Krugel, agrees with this position, naming Eskom as the biggest risk to the economy, and saying that the reality of the power crisis could lead to a downgrade.

Intellidex said that, while a rating cut to junk is possible, it is unlikely. At most, the group expects that Moody’s will cut South Africa’s rating outlook to negative – but there is a chance that there may be no decision at all.

Because of the way Moody’s operates, it may not deliver a rating decision at all, and may just publish a research report, Intellidex said.

“Such a move would be a huge disappointment to the market,” it said.

According to Attard Montalto, Moody’s has remained unjustifiably optimistic about South Africa for too long, and appears to be taking whatever the government says and promises at face value.

“We believe Moody’s is still anchored with an unjustified optimism about long term growth that comes, in part, from the way they take long term growth expectations to be an average of the past 4 years and the next three short run forecast.

“This average is slowly falling over time but not significantly enough to force a major shift in their quantitative scorecard at this time in our view – and so not onwards into fiscal and debt views,” he said.

“Overall however we think there is still an excess of trust at Moody’s in taking what government presents to them at face value without critical appraisal.”

The analyst said there may also be a sense of risk aversion attached, where the ratings firm doesn’t want to be responsible for compounding problems in South Africa, as well as balancing the country’s position with its ratings of other nations like Morocco and Indonesia.

If Moody’s downgrades South Africa to full junk status, the country will be booted from the World Government Bond Index, and will force investors to pull their money out of the country. Source: (BusinessTech) https://bit.ly/2FDAcWJ