There were two State of the Nation addresses last week. But one president acquitted himself eminently better than the other. President Trump’s speech was full of stretched facts and dubious figures. He inflated the number of jobs created under his presidency and boasted that wages are rising at the fastest pace in decades (they’re not). And once again, he stoked fear about a new security crisis at the Mexican border. Furthermore, there is still no clarity on trade discussions as the 1st March deadline for a deal to be reached looms ever closer. While it is largely expected that China will be able to stave off a further round of tariff increases, the Trump administration is playing its cards close to its chest.

Across the pond, projections for growth in the Eurozone have been sharply lowered, amidst signs of a broad slowdown. New orders received by factories are declining at their steepest rate for nearly six years and the services sector is starting to stall. Diplomatic relations too, between France and Italy, have reached a new low with France complaining of “unfounded attacks and outlandish claims” by Italian leaders. The two governments have often clashed over a range of issues, but the latest spat was sparked after Italian Deputy Prime Minister Luigi Di Maio met with French “yellow-vest” protestors near Paris last week. France has called this most recent interference an “unacceptable provocation” and has recalled its ambassador to Italy. 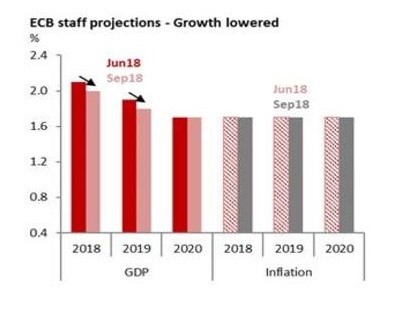 The situation, warn analysts, is “unprecedented” since the end of World War Two. (The “yellow-vest” protest was started by a tiny detail in the Budget for next year, a routine rise in eco-taxes on fuel. It sparked a small local rebellion, which spread, through the use of social media, to become a nationwide protest by those who feel they have become economically marginalised).

Brexit continues to weigh on UK growth and confidence. The Bank of England has warned that Britain faces its weakest economic growth in a decade. The Bank has acknowledged that investors have scaled back their plans and has lowered its growth forecast for 2019 from 1.7% to 1.2%. A survey conducted of more than 200 British firms shows that half have begun to prepare for a no-deal Brexit.

Eskom has presented its case for higher tariffs than initially applied for. The parastatal is now requesting Nersa to grant it tariff increases of 17.1% for 2019/20, 15.4% for 2020/21 and 15.5% for 2021/22. Such exorbitant requests pose not only a threat to the country’s inflation outlook, but also to growth, as energy-intensive sectors such as manufacturing and mining will be particularly adversely affected. Electricity prices in SA are already 30% higher than the international benchmark.

Consumers will also be affected and this will weigh on household consumption. Nersa has said it will make a ruling on the application before the 15th March, but could not commit to a definitive date.

President Ramaphosa’s State of the Nation address was, well, presidential. He struck all the right notes on all the right topics. While much depends on the outcome of the elections, scheduled for the 8th May, Ramaphosa was at pains to stress that growth- and employment-enhancing initiatives will be top of his agenda. On the land reform question, it seems that the government will focus on redistributing state-owned land in the short- to medium-term.

The elephant in the room, Eskom, was also tackled head on. Critical steps to be taken were confirmed: Eskom will be reconfigured into three separate entities under a holding structure and operational and cost inefficiencies will be addressed. (Eskom CEO Phakamani Hadebe is fully in favour of unbundling, calling it painful but necessary). Furthermore the government will take on some of Eskom’s debt, although this will be done without overburdening the fiscus. (We await more details of exactly how this will be done in the Budget Speech). Whatever the shape and form that Eskom eventually takes, a new business model is urgently required.

Heartening were Ramaphosa’s commitments to secure a top-50 position in the World Bank’s Ease of Doing Business Index (SA currently ranks 82nd), attracting 21m tourists by 2020 (up from 10m last year) and setting up a unit to investigate serious graft. The new body will report to Advocate Batohi and not the SAPS.  Other key highlights included:

·  Special economic zones will be set up for the clothing industry

·  An electronic visa system will be introduced

·  A rapid response team will be established to tackle water problems.