The 1st March trade truce deadline is fast approaching. US President Trump is digging in his heels and has said he will refuse to soften his stance on intellectual property issues when trade talks with China resume at the end of this month. If the two nations fail to reach a truce, the US has threatened yet more import tariffs on another $200bn worth of Chinese goods. The intellectual property issue arises as a result of China’s foreign-ownership restriction laws, which require foreign businesses operating in that country to form joint ventures with domestic Chinese firms, which often includes some type of technology transfer. While this practice violates WTO rules, it is difficult to hold China accountable since any technology transfer usually occurs on mutually agreed upon terms. The American Secretary of Commerce has warned that the two sides remain “miles and miles” away from a deal.

SA inflation slowed to 4.5% year-on-year in December from 5.2% in November, bringing 2018’s full-year inflation rate to 4.6%. This is comfortably anchored around the Reserve Bank’s midpoint target of 4.5%. Nevertheless, complacency is not advised as higher electricity tariffs, coupled with gradually increasing oil prices and a pickup in food prices, will see inflation rise to 4.9% this year. (Oil is expected to average $68 per barrel in 2019, while food inflation is forecast to average a little over 5%, from 3.3% in 2018, says RMB).

The FNB/BER consumer confidence index was unchanged in the fourth quarter, and there were improvements in two of the three sub-indices, namely expected economic conditions and financial prospects. Looking ahead, the two fuel price cuts in January, coupled with a slightly improved growth outlook for the country in 2019 (1.3%-1.4%), are likely to lift consumer confidence slightly in the first quarter of this year. 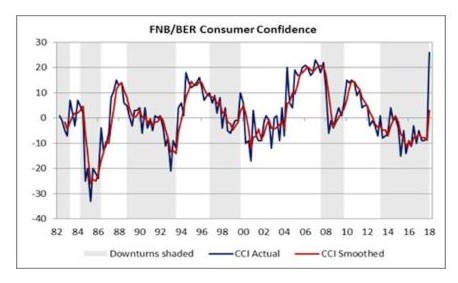 When President Cyril Ramaphosa spoke out at a dinner in Davos last week about SA’s “nine lost years,” it acted as a sharp reality check for many. The State Commission of Inquiry, currently underway in Johannesburg, bears testament to how many own goals SA scored during the Zuma era. The latest witness at the inquiry, facilities company Bosasa’s former COO, Angelo Agrizzi, has laid bare that the Guptas were not the only ones to capture the state. Bosasa CEO Gavin Watson wielded so much power that he was able to influence appointments in state institutions. Indeed, Agrizzi’s testimony bears witness to the fact that entities that were meant to oversee law enforcement and oversight bodies meant to protect them, have been compromised and corrupted in equal measure.