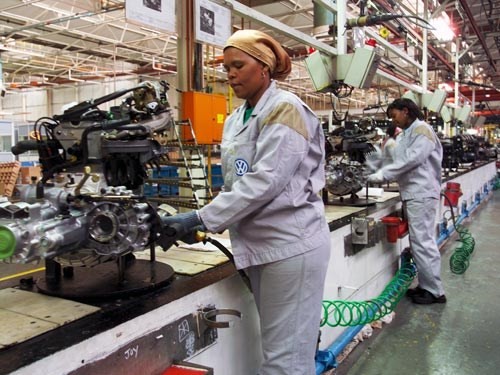 South Africa’s manufacturing sector is showing signs of a tentative recovery. Manufacturing production increased by 1.6% year-on-year in November, according to Statistics South Africa (StatsSA), while respondents in the Absa Purchasing Managers’ Index (PMI) expect business conditions to improve in six months’ time, for the first time since July 2018. The PMI, compiled by the Bureau for Economic Research at Stellenbosch University, rose from 49.5 in November 2018 to 50.7 points in December 2018, which is just above the neutral mark and signals growth in the sector.

The 1.6% year-on-year growth reported by StatsSA followed month-on-month changes of 1.1% in October and -0.8% in September. Seasonally adjusted manufacturing production for the three months ended November increased by 0.8% compared with the previous three months. Seven of the ten manufacturing divisions reported positive growth rates over this period, with the largest contributions to the increase in the three months being made by the food and beverage and the petroleum, chemicals, rubber and plastics products sectors.

Some economists are predicting that manufacturing will continue to improve in 2019, with export-orientated industries benefiting from a modestly growing world economy and steadier commodity prices. Others, however, believe that a meaningful and sustained rebound in manufacturing sector activity is likely to be curtailed by slowing global trade momentum as reflected in leading indicators such as the World Trade Organisation’s World Trade Outlook Indicator and the global PMI.

In a statement, Nedbank’s Group Economic Unit said that the manufacturing sector was forecast to fare moderately better this year than in 2018. “However, underlying conditions in industries providing inputs to local capital expenditure projects are likely to remain sluggish given the fragile state of business confidence, continually weighed down by rising operating costs, disruptions caused by persistent capacity constraints in key economic infrastructure and continued legislative and regulatory uncertainties,” it said.

“While parts of the economy appear to be mending, the pace of recovery remains slow and patchy

Therefore, there is no evidence of demand pressure on prices. Cost-push pressures on prices appear much more contained than towards the end of last year,” Nedbank’s economists added. Source: http://crown.co.za/featured/8687-sa-manufacturing-sees-tentative-recovery