If President Trump invokes emergency powers to build his wall, it could end the government shutdown, but at what cost? The US government has been in limbo since a standoff between the Republicans and the Democrats over the funding of the $5.7bn wall at the US-Mexico border. Emergency powers mean that the American president could bypass Congress and obtain the means for the wall through military resources. It is technically possible but will not be accepted by Trump’s critics and civil liberties groups without a fight. Moreover, it would be a terrible misuse of power and a violation of constitutional norms. There are economic implications too. A government shutdown not only disrupts the day-to-day running of the federal government, it also affects millions of federal employees who do not receive their salaries and if allowed to continue, will eventually start to affect US economic output, mainly as a result of unpaid workers spending less. 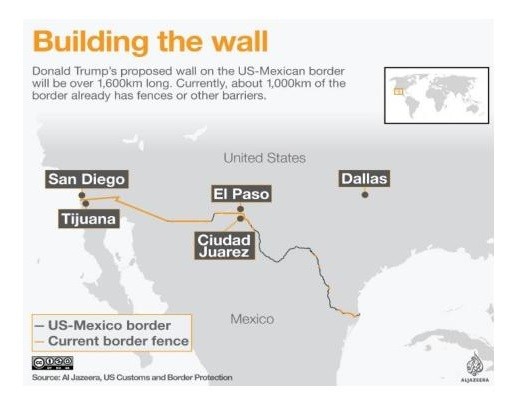 Across the pond, British Prime Minister Theresa May is facing battles of her own. She has been forced to contemplate a “Plan B” amid signs that the British Parliament will reject the deal she has reached with the EU. Britain is due to leave the EU on the 29th March, and time is running out for May to secure an agreement and avoid what would undoubtedly be a costly and chaotic “no-deal” exit. If the UK leaves the Union with no new trading deals in place, the country could face a recession. The Bank of England has warned a no-deal exit would mean that GDP could fall by as much as 8%, exceeding the depth of the 2008 recession.

Here at home, the Absa PMI for December marked the first time last year that the index breached the 50-level mark, reaching 50.7 from 49.5 in November. The result was as a result of positive sentiment being expressed in three of the five subsectors, namely new sales orders, expected business conditions in six months’ time and business activity. Respondents noted a further rise in export orders although a deceleration in global growth, as suggested by the downturn in many of the international PMI indicators, may start to weigh on export sales growth going forward. Even more positively, for the first time since July respondents expect business conditions to improve in six months’ time. The index tracking this component rose for a second month to reach 51.4 in December and is now almost 10 points above the low of 41.7 reached in October.

A further decline in the purchasing price index, as a result of the sharp fuel price drop at the start of the month, likely lifted spirits as did the leading indicator which reflects that sales orders are currently outstripping stock levels. However, bear in mind that as most businesses return to work today, the likelihood of load shedding increases which will impact negatively on manufacturing production.

Looking ahead, domestic issues will most definitely dominate in 2019. Further action will be required for Eskom and indeed most other SOEs, structural reforms, which will be vehemently resisted by the populists, are crucial and a volatile rand could put our fragile economic recovery under threat in the form of rising inflation.

Eskom has been coming under renewed pressure to trim its bloated workforce and to manage its operating costs more efficiently. The parastatal has asked the government to absorb R100bn of its debt which Moody’s has indicated will only be positive if this is accompanied by a measure to improve Eskom’s financial viability and to reduce its debt burden. But there is no guarantee that any of this will happen, given that Eskom has already twice delayed its turnaround strategy. Bear in mind too, that absorbing R100bn of Eskom debt will add about 2% to SA’s debt-to-GDP ratio (it is currently 55.8%).

Growth of 1.3% is expected this year, says the World Bank. And while this rate is up on 2018’s 0.9%, it remains well below the sub-Saharan African projected average of 3.7%. Growth will probably increase to 1.7% in 2020 and to 1.8% in 2021, but even these numbers remain woefully below the growth needed to make a dent in unemployment. A review of SA’s sovereign credit rating is scheduled by Moody’s for the 29th March.