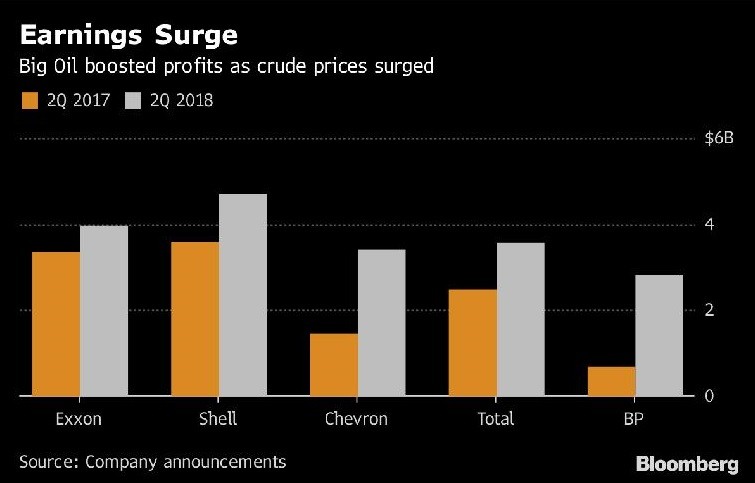 The price of Brent crude traded above $85 per barrel last week, a four-year high, on supply concerns ahead of US sanctions against Iran which will become effective the 4th November. Iranian output in September fell by 100,000 barrels per day. In addition to the worries about Iran, prices are being supported by global demand that has remained strong in the face of trade tensions. Oil market sentiment has also been lifted by the last-gasp deal to salvage Nafta, the trilateral trade agreement between the US, Canada and Mexico. There is now a growing risk that oil could touch $100 per barrel, the HSBC has said in its latest Global Economics outlook.

Various analysts have put forward the theory that SA is one of the countries that remains most vulnerable to current global dynamics, after Turkey and Argentina. However, RMB feels that this analysis is misleading and that SA is far more resilient. While SA does indeed rank poorly when it comes to macroeconomic factors, these imbalances are far less extreme than Turkey’s or Argentina’s and the country’s debt is also largely domestic-currency-denominated. The risk-off sentiment towards SA can better be explained by a strong dollar and rising US interest rates. The rand will continue to be a victim of emerging market sentiment for the next 12 months and volatility will escalate in the period leading up to the medium-term budget policy statement, scheduled for later this month, and again around next year’s national elections. Post the election cycle, we can expect a serious review of our prospects by the ratings agencies.

Markets reacted to the speculation that Finance Minister Nhlanhla Nene has asked to be relieved of his duties, following his testimony at the Zondo Commission where he indicated that he met the Gupta family at their home on several occasions. The news sent the rand weaker as investors await Ramaphosa’s decision on Nene’s request. If Nene does walk, it is only fair that the likes of Gigaba and Dlamini follow suit.

Higher fuel prices are likely to push the Reserve Bank’s inflation forecasts upwards. Elevated fuel prices could also start to weigh on food prices due to higher transportation costs and there could well be a 25 basis point interest rate hike before the end of the year. Much though will depend on the trajectory of the oil price and performance of the rand.

Last week marked President Ramaphosa’s much-anticipated jobs summit. Coming out of the summit was a commitment by the financial sector to invest R100bn over the coming five years on BEE industrial enterprises, a commitment for alternatives to be explored ahead of retrenchments, including executive salary sacrifices and the expansion of the designation of products for local procurement. The export drive that prioritises manufactured agricultural and mineral products is also going to be ramped up, including the investigation of any remedial action needed at ports in order to clear inefficiencies. Ramaphosa has proposed the creation of 275,000 jobs annually, no mean feat in an environment in which almost 9.6m people are out of work.

However, all is not lost. If some of the structural reforms as envisioned in the president’s stimulus plan are enacted and if there is less policy uncertainty (the recent release of the Mining Charter is a good place to start; it has been hailed by the Minerals Council SA as a “durable framework”), then some investment growth can be stimulated – albeit at a moderate pace. Data releases so far in the third quarter indicate that the economy will exit the recession. However there will be no major expansion and the recovery at best, will be modest.