Getting to Grips With the US/China Trade War 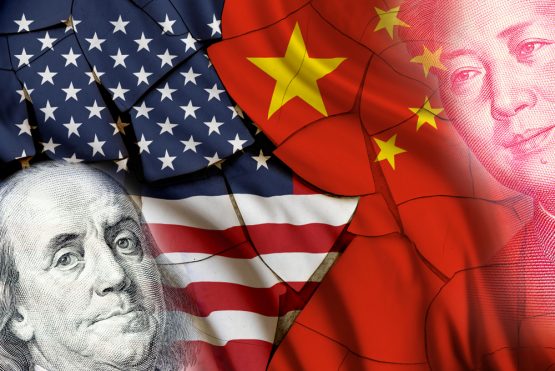 Where is it all going?

21 August 2019 – On August 1, President Donald Trump announced that the US would be imposing new tariffs on $300 billion of Chinese goods. This was the latest escalation in a trade dispute that has seriously unsettled markets.

Just 11 days later, however, Trump modified his position. Instead of implementing all of the tariffs on September 1 as planned, he announced that some would be delayed until mid-December.

The very next day, however, markets gave up all of those gains and more, as analysts noted that the chance of a recession in the next 12 months had gone up, mostly due to fears over trade. The S&P 500 dropped 2.9%, with only three companies in the index making gains.

A lot of noise

These rapid swings in the market highlight how nervous everyone has become about the potential impact of the escalating tensions between the US and China. This week, BlackRock said that it has become the most important factor in market direction.

“The recent escalation in US-China tensions reinforces our view that trade and geopolitical frictions have become the key driver of the global economy and markets,” the firm stated in a recent note.

It is, however, extremely difficult for investors to keep up with what is happening, since developments take place so rapidly. It’s easy to feel buffeted by a rapidly changing story that causes such large changes in sentiment from day to day.

It is a good example of why it’s necessary to step away from the market noise to get a complete picture.

What investors really need to know is not how this will affect the markets from day to day, but where the long-term impact is likely to lie.

“Our sense is that the market is overreacting to the news constantly,” says Cai Rees, a director at SEI Investments. “There is a lot of noise.”

Nobody really wants to go nuclear

Their view is that, ultimately, the worst-case scenarios being painted are unlikely to materialise.

“In context, the US economy is $20 trillion, so we are talking about percentages when discussing tariffs on $300 billion or whatever it ends up being,” Rees points out. “While that’s completely unwelcome, it’s not enough to disrupt the economy and put us in a global recession.”

At the same time, he believes that both sides have a real interest in finding a way to an agreement.

“There are some genuine reasons why we don’t think that either country will push the self-destruct button,” Rees says.

“From the US point of view, Trump has an election to win in 2020 and he wants to have a strong economy. The way to do that is to have a trade deal and put some extra confidence into the market.”

Likewise, while some commentators have the view that Chinese leaders are unconstrained in their ability to respond since they hold absolute power, this is not entirely the case.

“Really, they live under a social contract,” Rees explains. “Their citizens will accept authoritarian, dictatorship-like rule provided that they are taken out of poverty, are socially enhanced, are upwardly mobile, and that the middle class grows. For that social contract to stay in place, you have to have a growing economy, and so President Xi also has an incentive to have a trading relationship.”

He also notes that many commentators overlook the fact that while the trade dispute is causing unwelcome uncertainty, the potential outcomes are not all negative. The US is quite heavily reliant on Chinese imports, and if it could spread that more broadly it would reduce the inherent risks in being highly reliant on a single country.

Rees also believes that the trade relationship between the two countries, and potentially even between China and the rest of the world, does have to be rebalanced.

“China entered the World Trade Organisation in 2001, and the world opened up to it,” he says. “But it’s also fair to say that China didn’t really open up the world. Along the way the price of doing business in China has often meant the forced transfer of intellectual property.”

Now that it is the second biggest economy in the world, Rees believes that has to change.

“There has to be a fairer environment and a more open China,” he argues.

“In the long term, if we did have a fairer and more open China, that is better. And the only country that can wrestle that situation into being addressed is the US. So there are positives there and I think we miss those sometimes, largely I think because of the way it has been dragged through the media, often for Trump’s campaigning purposes.”

Given this context and the motivations on both sides, Rees doesn’t believe that a worst-case scenario is the most likely scenario.

“We do see the worst outcomes and share the view that those worst outcomes are negative, particularly if it broadens out of goods into embargoes on services, and if it spills over into Europe and Japan,” he says. “But that is not our base case. Our sense is that the market is very often focusing on the worst case and then getting some relief when there is good news. We are prepared to ride that out.” Source (Moneyweb) https://bit.ly/2TG4Svy