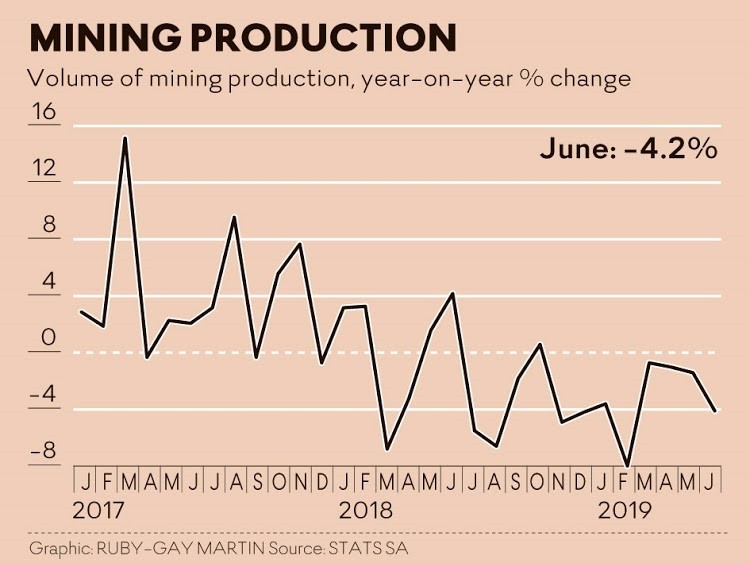 But seasonally adjusted mining production rose 3.2% in the second quarter of 2019 compared with a contraction in the first quarter

14 August 2019 – Mining production saw a steeper-than-expected contraction in June but rebounded in the second quarter of the year, which will boost GDP.

The sector has been hard hit by high input costs, particularly in the gold sector, waning global demand and subdued commodity prices.

Mining production decreased 4.2% year on year in June, after a contraction of 1.5% in May, data from Statistics SA showed on Thursday. This is the eighth consecutive contraction for the sector and a worse outcome than the 2.2% contraction economists polled by Bloomberg had expected.

Seasonally adjusted mining production increased by 3.2% in the second quarter of 2019 compared with a contraction in the first quarter when the sector was battered by load-shedding.

This bodes well for the GDP figure for the quarter, indicating that SA could avoid a recession.

The largest negative contributors in June compared to the year earlier were gold, down 16%; diamonds, down 33.2%; and platinum group metals (PGMs), down 6.3%.

Stats SA showed that coal is SA’s biggest revenue earner, with sales of R11.63bn in June, followed closely by PGMs with total sales of R11.48bn, and iron ore at R6.17bn. Source(Businesslive) https://bit.ly/2H5Ze0S