Inflation Unchanged at 4.5% in June Higher Readings Expected Towards 2020Q1 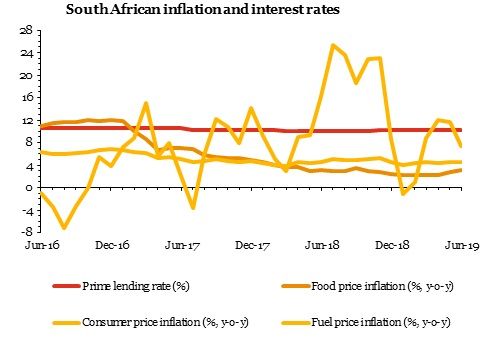 25 July 2019 – Statistics South Africa (Stats SA) reported on July 24 that consumer price inflation was stable at 4.5% year-on-year (y-o-y) in June. This was in line with economists’ expectations and spot on the middle of the South African Reserve Bank (SARB) target range of 3%-6%. Inflation expectations and outcomes, both locally and in major economies, have in recent months come in below expectations. For emerging market economies, stronger currencies against the US dollar have aided in this. Stats SA’s index of import cost inflation was most recently measured at 3.1% y-o-y, and only 0.1% y-o-y when excluding the cost of crude petroleum.

Stats SA recorded higher y-o-y inflation in the categories for food and alcoholic beverages, alcoholic beverages and tobacco, and housing and utilities. Food price inflation increased from 2.8% y-o-y in May to 3.2% y-o-y in June – the highest since September last year. Bread and cereals cost on average 0;.4% month-on-month (m-o-m) more and were 7.3% y-o-y more expensive. The Global Information and Early Warning System (GIEWS) reported earlier this month that the local maize harvest is set to come in at a below-average 11.5 million tonnes due to rainfall deficits – particularly at the start of the season – and a decline in area planted.

However, while this staple food supply situation added upward pressure to the price of the consumer basket, a decline in transport inflation countered the impact, resulting in no change in headline inflation between May and June. Fuel price inflation eased from 11.6% to 7.4% despite a small increase in both petrol and diesel prices during June, with base effects from a sharp rise in fuel costs in mid-2018 coming into play. (South Africa’s petrol price is now the 43rd-highest out of 92 countries currently tracked by Trading Economics, as measured in nominal US dollar terms.) The purchase price of new vehicles also declined by 0.1% m-o-m and was only 3.1% y-o-y higher, which further added to the positive influence of transport indicators on headline inflation.

The SARB said in January that it expected inflation to average 4.7% in the first half of 2019. Regular downside surprises in inflation data resulted in a mean of only 4.4% during the period. This better-than-expected price situation, which positively influenced the short-term outlook for inflation, allowed the SARB to cut interest rates by 0.25 percentage points last week. The central bank’s Monetary Policy Committee (MPC) commented that overall risks to the inflation outlook are largely balanced and that demand-side on consumer prices are subdued. The SARB forecasts inflation at 4.4% during the third quarter of 2019, and policymakers do not currently foresee a further easing in interest rates after this month’s cut.

Looking further ahead, the currently subdued inflation situation is expected to deteriorate heading into next year. The MPC expects inflation to rise to an average of 5.4% in 2020Q1 before ebbing to a mean of 4.9% in the last quarter of next year. After a string of downside surprises in food price inflation in 2019 so far, the SARB warned this month that it expects food inflation to rise to an average of 5.6% in the second and third quarters of 2020. Maize prices are expected to increase by 7% towards March 2020, according to a recent South African Grain Information Service (SAGIS) bulletin. However, the MPC is not anticipated to react with interest rates to the rise in headline inflation. By Lullu Krugel, PwC Strategy& Chief Economist for Africa, and Dr Christie Viljoen at PwC Strategy& Economist  Source:(FA News) https://bit.ly/2YvSuU5