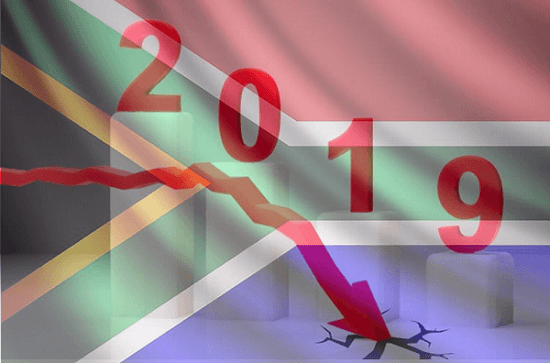 28 June 2019 – Not since the 2nd World War ended in 1945 has South Africa’s economy been caught in such a long downward spiral, the Reserve Bank says in its latest Quarterly Bulletin.

The central bank stressed that the local economy had now been generally trending down for 67 consecutive months, or a week short of five and a half years.

“The only other time that a falling cycle lasted more than 50 months was between 1989 and 1993, when the former government renewed a state of emergency and the country prepared for its first democratic elections”.

Indicators that the economy could be shrinking even further, the Bulletin points out, can be seen in the recent GDP contraction of 3.2% – the biggest in a decade – that emerged from recent data released by Statistics SA.

The crippling stage four power outages of earlier this year – the worst since 2008 – also compounded matters.

The Reserve Bank reports that it raises the spectre of continued economic contraction and another recession before the end of the year.

The Bulletin adds that although stability has been established in terms of Eskom and its output capacity, business and factory confidence decreased in May and consumer spending, which contributes roughly 60% to GDP, remains alarmingly weak. Source (F&T Weekly) https://bit.ly/2KIeowD