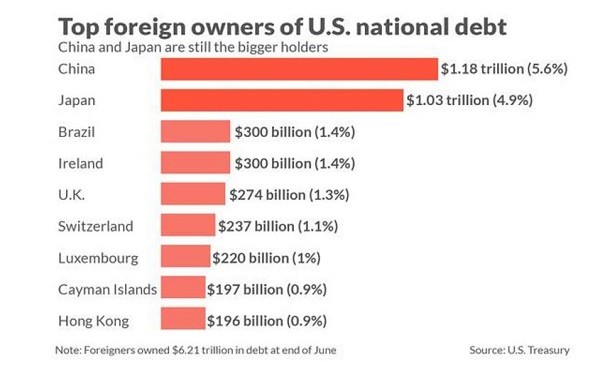 Global stock markets were once again rattled last week by news that America has decided, based on national security concerns, to restrict US companies from doing business with China’s Huawei. This has serious implications for global trade. Huawei is the world’s second largest maker of smartphones and already Alphabet’s Google, which provides the Android operating system for mobile phones, has been obliged to cut most of its ties with Huawei. There are fears now that this trade war could escalate into a technology war. China is America’s single largest foreign creditor, holding over $1 trillion of US bonds. Should the Chinese decide to call on these loans, the implications for borrowing costs and interest rates for the world’s largest economy, would be dire. The graphic below was as at end-June 2018.

Theresa May will step down as Britain’s Prime Minister on the 7th June, finally calling time on her ill-fated, three-year efforts to steer the UK out of the EU. An election to choose her replacement will begin on the 10th June. There is a crowded field of candidates but it is hoped that a new leader will be in place by the end of July.

There have been some notable local happenings over the past few days. CPI moderated to 4.4% year-on-year for April and interest rates were kept on hold by the Reserve Bank at its MPC meeting last week. But the Bank’s tone has turned distinctly dovish. Two MPC members voted for a rate cut, while three opted to keep the repo rate on hold. The Bank’s Quarterly Projection Model now projects one interest rate cut during the first quarter of 2020, with a downgrade in the Bank’s inflation forecast to 4.5% for 2019, 0.3% down from what it was forecasting at its March meeting. But given the change of tone in the latest MCP meeting, there is an increased possibility of a rate cut at the next MPC meeting, which is scheduled for July. Once again, the two risk factors are the exchange rate and the oil price.

Finance Minister Tito Mbweni is taking on heroic status in my eyes. He is adamant that Eskom must perform an operational overhaul before any more funding can be sought from the state; he has also urged the parastatal to attempt to recover monies owed by municipalities before seeking debt assistance. His stance sets the ball firmly in Eskom’s court and makes it clear that the SOE bears the onus for ultimately effecting the changes set forth by the Department of Public Enterprises based on recommendations made by the sustainability task team. Many moving parts, not least of which is the resignation of CEO Phakamani Hadebe, who cited health reasons for his decision, but the longer Eskom keeps us in the dark (pardon the pun), the greater the level of uncertainty.

The new and revised Cabinet started to take shape last week, although Ramaphosa will only announce his new Cabinet after his inauguration. Environment Minister Nomvula Mokonyane, accused of taking bribes, has been removed. Although meant to take up a senior position in Parliament, she has indicated that she has withdrawn herself from the list of ANC MPs due to family responsibilities. The news came hot on the heels of Deputy President David Mabuza’s request that his swearing-in as an MP be postponed, saying that he wished to engage with the ANC integrity commission about allegations of corruption and his links to political killings in Mpumalanga. Both developments point to a possible turning point in the fight against corruption. Should Mabuza choose to step aside, Naledi Pandor and Nkosazana Dlamini-Zuma are both equally capable of taking up the position. While Dlamini-Zuma is a known Zuma ally, she is said to have a good working relationship with Ramaphosa and has not shown any signs of standing in his way as he sets about reforming the state. Pandor is another credible candidate. Thoroughly modern in her approach, she is an avowed Ramaphosa supporter and was his preferred candidate for deputy ahead of Nasrec. Disgraced former finance minister Malusi Gigaba and eminently useless former National Assembly Speaker Baleka Mbete have also withdrawn their names from the candidate list.

Most of the existing domestic challenges – slowing global growth, policy uncertainty and lingering drought in some areas of the country – remain. But coupled with this came load shedding at the beginning of the year, which not only had a severe impact on industrial output, but shattered business and consumer confidence. Added to this, the mining sector was badly affected by a five-month long strike at Sibanye-Stillwater’s gold mine which meant that production in the mining sector fell by 3.4% quarter-on-quarter. Manufacturing did not fare much better, and production contracted by 2.5% quarter-on-quarter in the first three months of 2019. This all points to prospects for the pace of economic improvement to be slower than previously anticipated. RMB has thus downgraded its growth forecast for the year from 1.3% to 0.7% (the Reserve Bank says 1%) and expects to see a contraction in first quarter GDP. While one hopes that as political uncertainty fades, there will be a pickup in investment, the problems at Eskom will be an ongoing constraint. Total debt is now approaching $35bn.