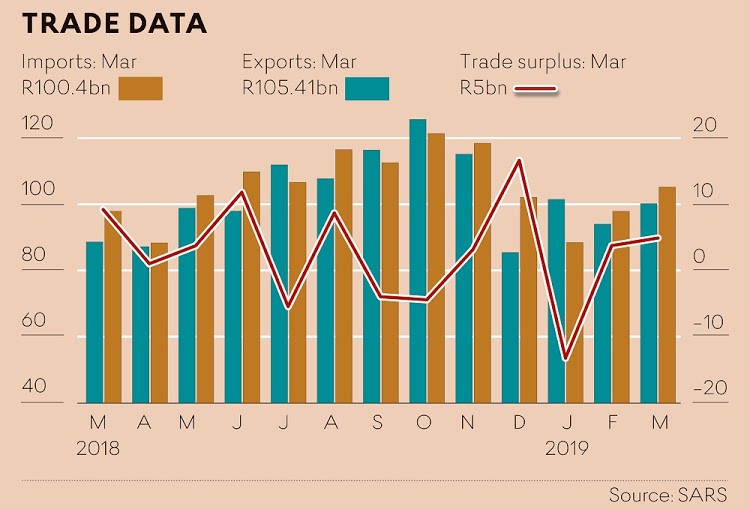 2 May 2019: SA recorded a trade surplus of R5bn in March, as growth in exports exceeded growth in imports for the second month in a row.

March’s surplus was attributable to exports of R105.4bn and imports of R100.40bn, data from Sars showed on Tuesday. The Bloomberg consensus was for a surplus of R4.8bn.

Imports rose 7.5% in March compared to February, while imports rose 6.6%.

SA’s trade balance also beat expectations in February at R3.99bn — a rebound from the seasonal deficit recorded in January. Stats SA, however, revised this figure downwards slightly by R120m on Tuesday.

The balance of trade is an indicator of the difference in value between a country’s imports and exports and dictates SA’s current account, which is indicative of the country’s trade with the rest of the world.

Analysts had differed ahead of the release of the statistics, with some predicting a deficit. The figures are difficult to predict and economists stress that it is important to look at longer-term trends.

Investec expected the trade account to have widened. Investec economist Kamilla Kaplan said ahead of the release, “In recent years, a sizeable surplus was typically recorded in March. This year, the size of the surplus is likely to have been tempered by the effect on imports of rising international oil prices.” Source (Businesslive) https://bit.ly/2UMDpYg