US President Donald Trump has scrapped the waivers on the purchase of Iranian crude, sending oil to a near six-month high last week. Eight of the ten countries to whom the six-month exemption had been granted expected waivers to be renewed. Instead Washington took a hard line on Tehran’s nuclear disarmament plans. Trump has defended his decision by stating that he is confident that Saudi Arabia and the UAE will fulfil their pledges to make up the difference in supply. This view has not been echoed by OPEC members however, who have said that they will raise output only in the face of strong demand. Before the reimposition of sanctions last year, Iran was OPEC’s fourth-largest producer at around 3m barrels per day. Continued combat in Libya threatens to disrupt supply from that country while Venezuelan oil exports remain under sanction.

US-China trade talks resume this week amid increasing signs of the slowdown in global growth. The most recent of these is news that South Korea posted its worst quarterly economic performance in almost ten years, providing yet another stark warning to other export-dependent nations of the perils of slowing demand and increasing trade protectionism.  The economy grew by just 1.8% year-on-year, its slowest rate since 2009, with many economists predicting that any recovery in growth was likely to be tepid at best. Customs trade data for the first 20 days of April suggest that the nation’s export sector is still struggling to gain momentum. 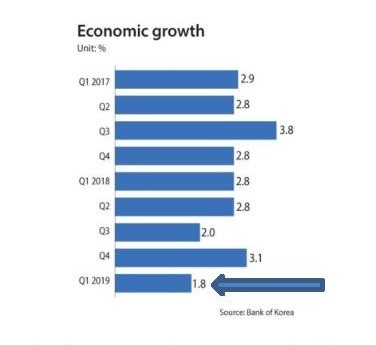 Investors are becoming more sensitive to local news as we draw nearer to the 8th May. This was apparent in the rand, which lost its footing and traded weaker against the dollar for most of last week. The rand’s performance was also not helped by Eskom, which once again had to approach the government for an emergency R5bn bailout to meet current payment obligations. The parastatal is basically bankrupt and it is highly probable that more of the R23bn promised for the year, due to be disbursed only in August this year, will be needed much sooner.

Election season has been in full swing for a number of weeks now and protests have intensified as political parties scramble for votes and marginalised communities use the opportunity to express their concerns. Thus far, demonstrations have affected Alexandra, Somerset West, Vanderbijlpark and Orange Grove, to mention a few. The most recent opinion polls all indicate similar insights:

i.                     a decline in the ANC’s share of the national vote relative to the previous election (note that in the table below the absolute best-case scenario for the ANC is only sufficient to match the outcome of 2014’s elections)

iii.                 an improvement in the EFF’s showing (the party is expected to be the largest beneficiary of apathy towards the ANC amongst poor black constituents)

Any overperformance by the ANC i.e. any share over 62%, will serve as a public affirmation of Ramaphosa and his language of rigorous reform. If he does receive a strong public mandate, it is hoped that this will provide the president with the courage to tilt further towards prudent and pro-growth outcomes, despite the degree of internal friction this may cause. Developments to keep an eye on include more robust SOE reform, a more considered approach towards land expropriation, overall fiscal tightening and a reduction in the size of the Cabinet.