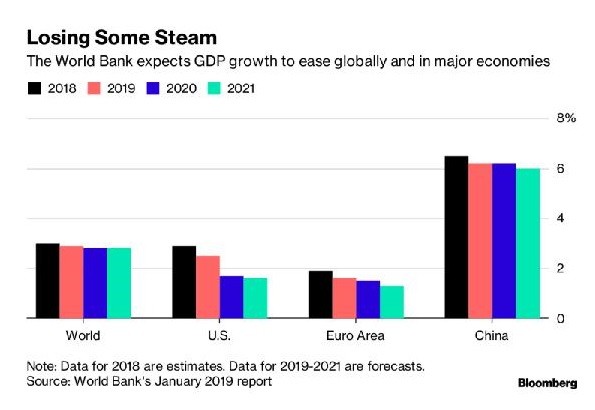 Global: The chief economist of the IMF has come out in favour of the US Fed’s decision to shelve interest rate increases for now, citing “weakening momentum” and “considerable and rising” risks to the global outlook. The picture, she says, is further complicated by stagnant growth in the Eurozone, a deceleration in China and the ongoing risks related to trade protectionism.  The World Bank concurs, saying that downside risks for global growth have become more acute.

Fortunately, there are hopes that an amicable trade agreement between the USA and China can be struck.  Trump has said that he is willing to let the 1 March deadline “slide for a little while” if his administration is satisfied with the concessions China is willing to offer. The more positive tone was further reinforced by a tentative deal by American lawmakers to avert yet another government shutdown.

OPEC significantly reduced its crude oil production in January, making good on its latest deal to curb output and rebalance an oversupplied market. Crude output fell by 797,000 barrels per day last month with the bulk of the cuts coming from key OPEC member, Saudi Arabia. OPEC’s efforts also got a boost from lower production in Iran, Libya and Venezuela. Iran and Venezuela’s production levels moderated due to US sanctions, while Libya’s output fell as the country’s largest oilfield remained side-lined by a dispute with workers.

Local: Valentine’s Day came and went, but there was no love lost for Eskom. After five days of rolling blackouts last week, the parastatal is no further along to finding a long-term solution to its operational, structural and financial problems. Moody’s is of the opinion that the plan to split the power utility into three entities may create a more transparent structure, but will it address the financial challenges? The entity is burdened with R419bn worth of debt, it is overstaffed to the tune of 30,000 and design flaws at the mouth-wateringly expensive Kusile and Medupi power plants and neglected maintenance schedules mean that the energy availability factor is about 64% at the moment when it should be at about 80%. AgriSA SA has already warned that continued load shedding will have a dire impact on the agricultural sector and the broader value chain. It is estimated that lack of power could shave 30-50% of first quarter GDP growth numbers. With an election coming up, solving the crisis quickly will be in the ruling party’s best interests. Eskom’s woes have weighed on the rand and bonds alike.

A Reuter’s poll has shown that Finance Minister Tito Mboweni will likely squeeze a tenth of a percentage point off the budget deficit forecast for the next financial year. The poll suggests that the deficit target will be 4.1% of GDP, narrower than the 4.2% he predicted in October. However, this may be difficult. Official figures show that tax revenue in the first nine months of the 2018/19 fiscal year (April to December) underperformed as the lagged impact of the recession started to bite. Total revenue growth moderated to 7.6% year-on-year in December below the 10.6% required rate to reach the tax target of R1.3 trillion. This means that total tax collections will fall short by R18.2bn. Be prepared for further tax increases on the fuel levy, on luxury goods, on alcohol and tobacco, as well as environmental and health taxes. No major increases on the three large tax items, namely VAT, personal income tax and corporate income tax, are forecast, not only because it is an election year, but also due to the negative impact that higher taxes will have on growth.