Risks to the Inflation Profile Forces the SARB’s Hand

Global growth has peaked and will slow in 2019, from 3.7% to 3.5%, says the OECD. Trade wars remain the largest threat to the OECD’s outlook. Weakening international cooperation will make it difficult for governments to work together to solve problems.  The widening inequality in developed economies will also have consequences, resulting in a further slowdown in economic growth.

The abrupt retreat of the price of oil on global markets inevitably brings back memories of the slump in 2014. Now analysts say pressure is rising for OPEC members to cut production even more than Saudi Arabia’s suggestion of 500,000 barrels per day. The problem is that Saudi Arabia can only do so much. Production in the US has been rising much faster than expected, while volumes held in storage tanks around the world are beginning to build again, raising fears of a renewed glut. When OPEC members meet in Vienna in early December, we can expect them to announce cuts of up to 1m barrels per day, about 1% of world supplies. The Saudis in particular will have a difficult time of it, having to tread a delicate path between placating the Trump administration and their own need for higher oil revenues.

October’s inflation print, at 5.1% year-on-year, was most likely the tipping point in the SA Reserve Bank’s decision last Thursday to increase the repo rate by 25 basis points. The largest contributing factor to the inflation number was the fuel price, which rose 22.8% year-on-year. The good news though is that food price inflation is likely to remain constrained for longer. According to Agbiz, maize volumes are projected at 16.7m tons for 2018/19, substantially above SA’s annual consumption of 10.8m tons. The higher levels of supply mean that feed costs will decline, providing room for further moderation in meat price inflation. The SARB’s quarterly projection model suggests four increases of 25 basis points each by the end of 2020.

In its decision to increase rates, the Reserve Bank said that it remains concerned about the second-round inflationary effects of the persistently weak exchange rate. Other risks to inflation include rising wage demands and higher-than-expected electricity tariffs. (Eskom has applied for a 15% tariff increase over the next three years).  Oil prices also remain a concern, despite the recent slump. The large fall in prices – from $85 in early October to $62 currently – serves to reflect how volatile the price has become. Nonetheless, the current under-recovery rate on fuel points to a R1.60 per litre reduction in the price at the pumps in December.

Although eminently underwhelming, there is an indication of what one may expect post the 2019 elections. The communications and telecommunications ministries have been consolidated, effectively undoing the separation Zuma announced in 2014. Telecommunications is a crucial sector if Ramaphosa is to get this economy up and running again. Allocating spectrum will unlock significant value in the sector. It will also reduce data costs, which is essential if SA is to improve on its overall competitiveness.  What was disappointing was that Ramaphosa did not use the reshuffle as an opportunity to bench the perennially underperforming Bathabile Dlamini and Mokonyane. It is a clear indication that he is still walking a factional tightrope. 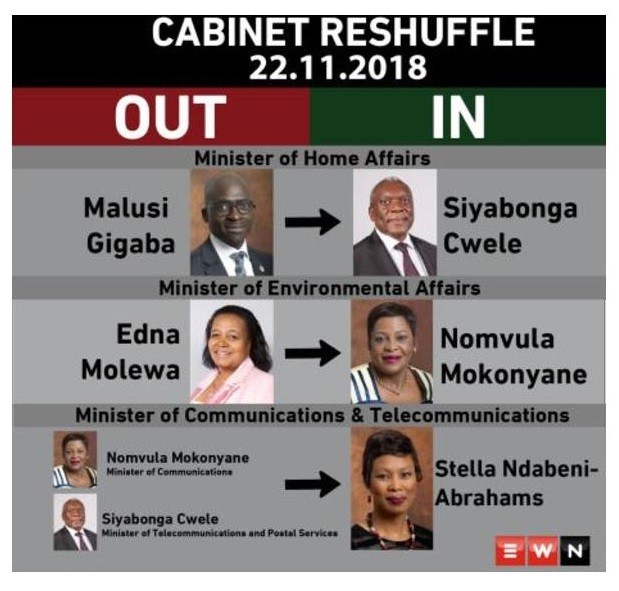