Brexit angst topped global headlines last week. The deal that British Prime Minster Theresa May secured with the EU, even though approved by her Cabinet, was met with high-level resignations from her Conservative party, a pound that lost substantial value and calls for a vote of no confidence against May. Many have said that her deal will leave Britain with no influence in Europe. However, May has stood firm, saying in a public speech that she was sticking to her plans and would see Brexit through to the end. A difficult path lies ahead. The UK will leave the EU on the 29th March 2019, and with each day that passes, the chances of no deal rises substantially. 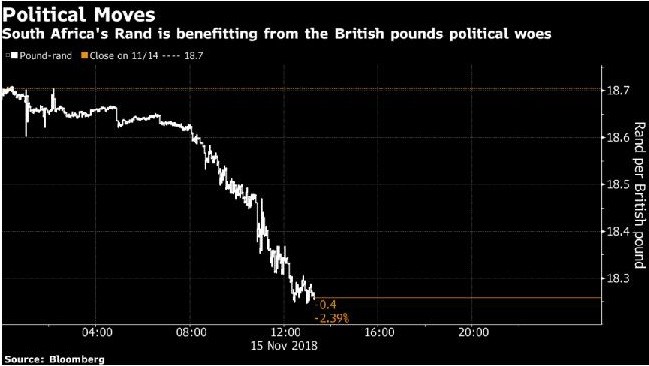 The EU is likely to push for the region’s third largest economy, Italy, to be put into an Excessive Deficit Procedure (EDP), implying greater oversight by the EU of Italy’s budget and possible sanctions. Thus far, the Italian government has defied the European Commission by sticking to its expenditure plans as part of a high-risk gamble to kick-start the stagnant economy. Government debt totals 130% of GDP and poses a threat not just to stability in the region, but to global stability.

Making matters worse, the powerhouse of European growth, Germany, unexpectedly saw a contraction in its economy of 0.2% in the third quarter, with a drop in export volumes suggesting that Trump’s trade war with China is starting to have a wider impact. Without Germany as the engine room, the EU will have trouble withstanding shocks that, in addition to Italy, include messy Brexit negotiations and continued trade tensions with the US.

The oil price continued to slide as OPEC warned that global demand next year will be 500,000 barrels per day lower than initially forecast. At just over $65, the price has shed almost 24% of its value in a month. The slide in the price will not only be welcomed by SA motorists, but will have important implications for the SA Reserve Bank’s inflation forecasts. Nevertheless, it will be a close call whether the Bank will announce a hike of 25 basis points at its MPC meeting this week. The Bank has made it clear that the rand’s depreciation this year is definite cause for concern, with the attendant risks to the inflation outlook.

Parliament’s Joint Constitutional Review Committee has formally resolved to recommend that the constitution be amended to allow for the expropriation of land without compensation, but there is unlikely to be much progress on this matter before elections next year. Market reaction thus far has been muted, mainly because there is a long road ahead before the recommendations have any bearing and partly because some view the proposed policy as merely a cynical electioneering ploy. Moreover, it is almost certain that the decision will be challenged in the Constitutional Court.

The modest 0.7% year-on-year increase in retail sales in September points to a lacklustre recovery for growth – third- quarter GDP growth is likely to hit 1.5%. This implies that annual growth will reach 0.6%. The performance of the agricultural sector will be the main swing factor.