27 August 2019 – Commentary: President Trump clashed with most world leaders over the US trade war with China at the G7 summit in France this past weekend, a stark reflection of his isolation on the world stage. The American president remains at odds with his colleagues over other key issues such as climate change and sanctions on Iran. For weeks, French president Emmanuel Macron has been urging Trump to soften his stance on Iran and so the appearance of Iran’s foreign minister at the summit, at Macron’s invitation, was a clear message to the American president that his view on Iran is not shared.

While the US economy continues to grow at a rate fast enough to keep fears of recession at bay, the warning signs are mounting. According to the business-research firm IHS Markit, the index of manufacturing conditions fell to below 50 in August, the first time since September 2009. Trump is already setting up the US Fed as the scapegoat should the economy weaken further. Trump has been lambasting the central bank and its governor, Jerome Powell for months, demanding lower interest rates to boost the economy. Yet most economists point to the fading effects of Trump’s tax cuts as well as the ongoing trade tensions for the cooling American economy. And if you consider recent history, the Fed appears to be vindicated. It kept its benchmark rates near zero through most of Obama’s presidency and the economy still failed to generate significant growth. While the numbers in the graph below seem impressive, the US has failed to top annual growth of 3% since 2005, the worst stretch in history. 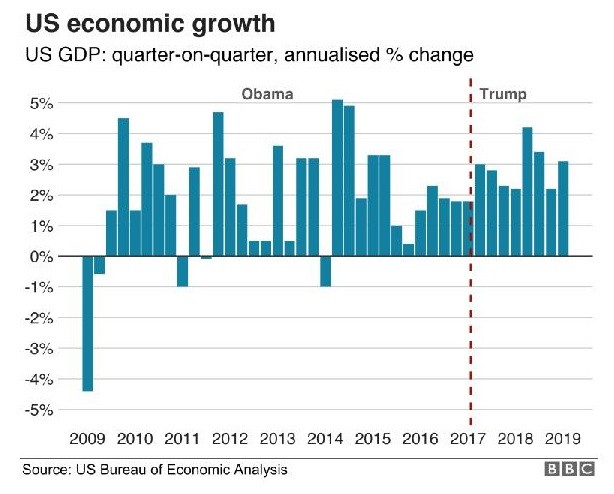 SA’s inflation rate for July was considerably lower than expected – at 4% year-on-year, it was a reflection of petrol price inflation having moderated. But electricity and water price inflation proved to be the surprise factor. There were fewer municipal price changes in July than a year previously but these increases will most likely take effect in August, thus making the reprieve short-lived. CPI is expected to average 4.3%-4.4% this year. 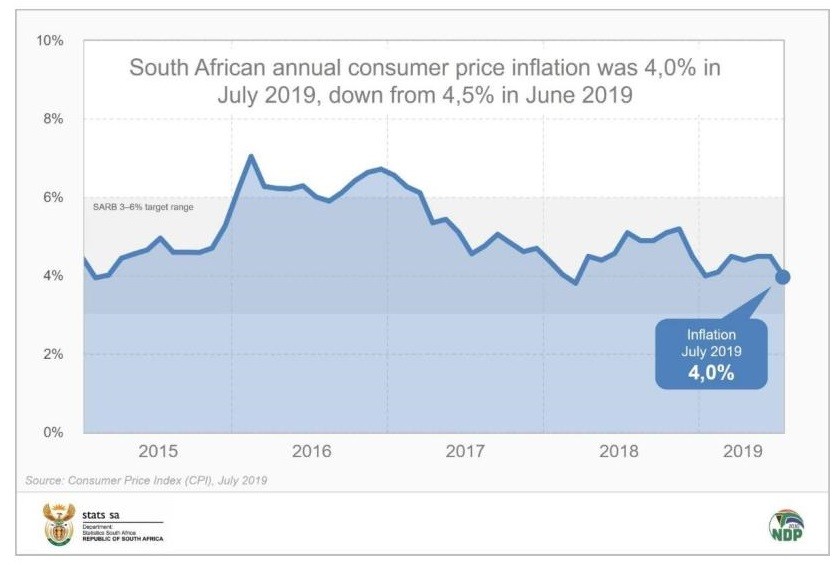 While the lower-than-expected inflation number has once again raised the prospect of rate cuts, the SARB will need to weigh a number of considerations – a volatile exchange rate versus benign inflationary expectations, looser global monetary policy against slower growth domestically. Given these counterbalancing forces, it is expected that the Bank will leave rates on hold until the first half of 2020. Looming risk factors for this year include the upcoming MTBPS and Moody’s rating decision due in November.

Domestic headlines have been dominated by news that the National Treasury has asked government departments to put forward proposals about how to cut their budgets. It is seeking cuts of 5% in 2020/21 and 6% and 7% for the next two years. Together, the cuts could total as much as R300bn over three years. First on the list will have to be the massive public service wage bill which will place Finance Minister Tito Mbweni squarely on a collision course with public sector unions and ANC populists alike. Real political nerve will be needed.