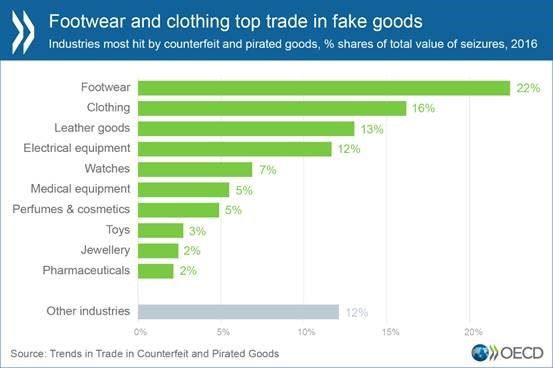 19 March 2019: Trade in counterfeit and pirated goods is on the rise and now stands at 3.3% of global trade, according to a new report by the OECD and the EU’s Intellectual Property Office.

Trends in Trade in Counterfeit and Pirated Goods puts the value of imported fake goods worldwide based on 2016 customs seizure data at US$ 509 billion, up from US$ 461 billion in 2013 (2.5% of world trade). For the European Union, counterfeit trade represented 6.8% of imports from non-EU countries, up from 5% in 2013. These figures do not include domestically produced and consumed fake goods, or pirated products being distributed via the Internet.

The goods making up the biggest share of 2016 seizures in dollar terms were footwear, clothing, leather goods, electrical equipment, watches, medical equipment, perfumes, toys, jewellery and pharmaceuticals. Customs officials also noted an increase in counterfeits of goods less commonly seen in the past such as branded guitars and construction materials.

The majority of fake goods picked up in customs checks originate in mainland China and Hong Kong. Other major points of origin include the United Arab Emirates, Turkey, Singapore, Thailand and India.

The countries most affected by counterfeiting in 2016 were the United States, whose brands or patents were concerned by 24% of the fake products seized, followed by France at 17%, Italy (15%), Switzerland (11%) and Germany (9%). A growing number of businesses in Singapore, Hong Kong and emerging economies like Brazil and China are also becoming targets.