Investors continued to monitor US-China trade talks last week. In a recently issued statement, the White House described talks between Washington and Beijing as “detailed and intensive,” which led to “progress between the two parties” and Trump has hinted at extending the 1st March deadline. The losses to both sides have already been substantial. For instance, $12bn in federal aid has been extended to American farmers for losses they have sustained, after China halted all purchases of US soybeans, which were the single largest US agricultural export in 2017. And Chinese smartphone manufacturer Huawei has been in the spotlight with CFO Meng Wanzhou being arrested and accused of fraud relating to the alleged use of a shell company to bypass US sanctions with Iran.

But while talks with China are going well, the US is not as fortunate in its dealings with the EU. The region has threatened retaliation should Trump impose punitive import tariffs on European cars, which he believes is a danger to US national security as it robs the country of its industrial base needed to produce military hardware. The consequences would be particularly devastating for Germany, whose car exports to the US are worth almost €27bn. The biggest BMW factory in the world is in South Carolina.

Finance Minister Tito Mboweni had much to contend with in his maiden Budget Speech last Wednesday – to manage SOE bailouts, falling tax revenue and competing for expenditure priorities against a backdrop of limp GDP growth. The Budget exposed a deterioration in the estimated budget deficits since the 2018 MTBPS, with the National Treasury forecasting a budget deficit of -4.5% of GDP for the 2019/20 financial year. If realised it will be the worst deficit since the -6.3% reported in 2010. 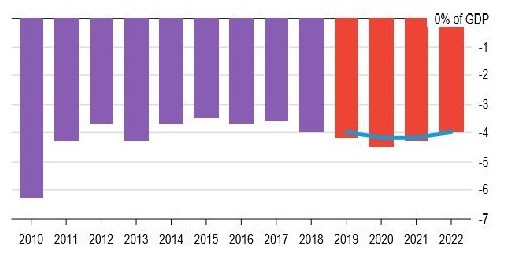 The higher deficits leave the country with a rising debt burden. The debt-to-GDP ratio will peak at 60.2% in 2022/23 (0.6% higher than the MTBPS estimate), before stabilising at 59.3% by 2026/27.  The fastest growing expenditure item in the budget is debt-servicing costs. SA borrows about R1.2bn per day. 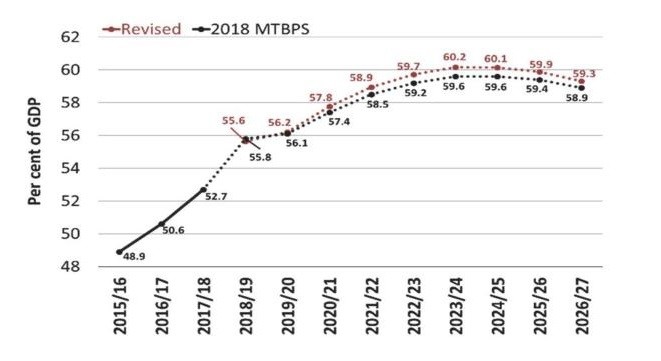 The size and structure of Eskom’s bailout was never going to please everyone. And while R69bn over the next three years is a huge chunk of cash, Mboweni made it very clear that the support must be accompanied by broader measures to stabilise the power utility. The ratings agencies were not convinced, with Moody’s requesting details of the proposed rescue plan and S&P placing Eskom’s credit rating under review.

Moody’s ratings review of the sovereign on the 29th March will be a close call. But all things considered, I believe we will avoid a ratings downgrade. There are reasons for some cautious optimism: the tough talk around the restructuring of the electricity sector which hopefully will translate into measurable actions, strict conditionality attached to future government support for SOEs, the willingness to undertake some pro-growth reforms and the planned reduction in the public sector wages bill. The difficulty remains in the implementation.