Trade and global trade concerns have resurfaced, with Bloomberg News reporting that the Trump administration is preparing to announce tariffs on all remaining Chinese imports if this month’s trade talks prove to be unsuccessful. In addition, the recent sell-off on US equity markets is casting doubt amongst investors about the US Fed’s ability to raise rates again in December. For traders who had got used to the seemingly inevitable rise of US stocks, the recent losses have come as a massive shock. But in August already, investment strategists were warning that markets remained far too complacent about trade war risks.

Weighing further on growth are the latest numbers out of the Euro Zone. Economic growth has fallen to its slowest pace in more than four years, a fact likely to heighten political tensions in the region. The Euro Zone grew just 0.2% quarter-on-quarter from July to September. Political instability is rife, not just in Italy which registered zero growth in the quarter, but in Germany too, where Chancellor Angela Merkel has said she will not be seeking re-election in 2021. She has also said she will be relinquishing leadership of her party in December, a move which is likely to lead to two centres of power. And in France, reforms promised by President Macron have not brought the widespread economic gains or job creation that was expected, damaging his popularity with voters.

Things aren’t much better in the UK. Ratings agency S&P has warned that a no-deal Brexit would spark a long recession and a likely reduction in Britain’s credit rating. The warning comes as Brexit talks have ground to a standstill due to a failure to agree on the Irish border.

Oil prices continued to drop last week, amid signs of rising supply and concern that demand will be another victim of the US-China trade war. Oil production from Russia, Saudi Arabia and the US reached 33m barrels per day for the first time in September, a happy occurrence in light of an anticipated decline in Iranian exports. The oil price has fallen about $10 a barrel from four-year highs reached in the first week of October.

The SA Reserve Bank estimates that SA’s repo rate will increase from its present level of 6.5% to 7.7% by the end of 2020 to contain rising inflation. “Although inflation has been quite well behaved for much of the year, it has now begun to accelerate, and we should expect it to be over 5% through 2019 and 2020,” said Bank governor Lesetja Kganyago in the forward of the monetary policy review, released last Monday. The Bank has made it clear that it would be more comfortable for inflation to be anchored in the mid-point of the target range, i.e. 4.5%.

On the data front, SA’s manufacturing PMI declined for a third consecutive month to 42.4 points in October, as growth concerns, both here and abroad, continued to weigh on sentiment. The sub-index tracking expected business conditions in six months’ time also slumped, an indication that short-term prospects remain weak.

However, some good news: motorists can expect a drop in the price of fuel of around 16-20c per litre this month. And President Ramaphosa, acting on the recommendation of the Nugent commission of inquiry, has fired SARS commissioner and destroyer-in-chief, Tom Moyane. Prospective replacements include former deputy finance minister Mcebisi Jonas and senior SARS officials Hlengane Mathebula, Nathaniel Mabetwa and Edward Kieswetter. Apparently, acting commission Sean Kingon is not in the running. 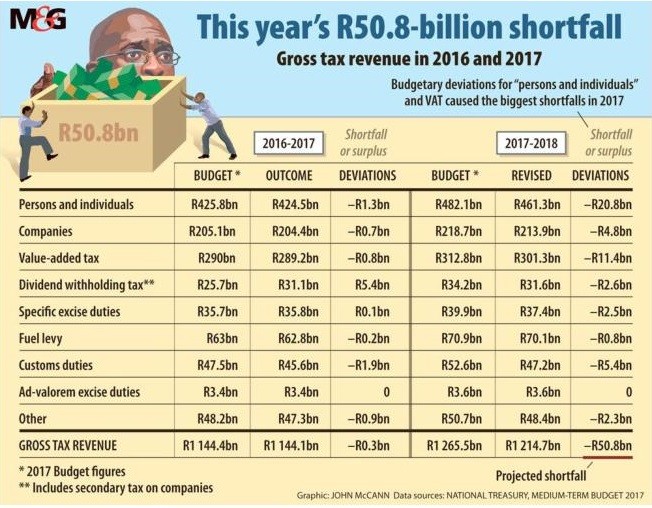