The Organisation for Economic Co-operation & Development (OECD) has revised its global growth outlook to 3.3% and 3.4% for 2019 and 2020 respectively. The downward revisions are attributed to ongoing trade tensions, Brexit uncertainties and declining business and consumer confidence. Trade growth has slowed, from 5.25% in 2017, to 4% in 2018, partly due to weaker demand for exports, notably from China.

Both India and Turkey have lost their trade benefits under Washington’s Generalised System of Preferences, which provides emerging economies with duty-free access to the US market for some of their exports. The move is likely to stoke trade tensions once again and will also weigh on risk sentiment for developing markets.

A further negative for emerging markets is that China has downgraded its 2019’s growth target to 6-6.5%. The lower bound of the estimate would be the slowest economic growth in almost three decades. Warning of a “tough economic battle ahead,” authorities have announced tax cuts worth $298bn in an effort to stimulate the economy. Output growth in China was 6.6% last year and economists are expecting around 6.2% this year before easing further in 2020 and 2021. The authorities have also prioritised reining in debt. Total debt is approaching 300% of GDP. Any slowdown in China has ripple effects across the world. If one looks at trade linkages alone, it is estimated that a 2% decline in the growth rate of Chinese domestic demand reduces global growth by close to 0.4%. 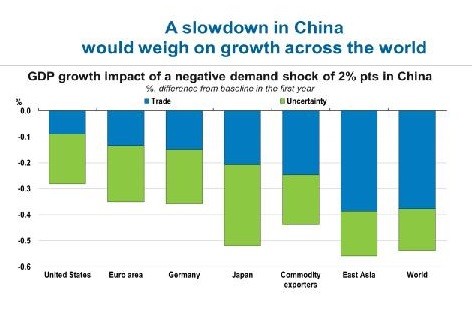 Nersa has granted Eskom a tariff increase of 9.41% this year, effective the 1st July, and further increases of 8.1% and 5.22% for the next two years.  Consumers and businesses had been hoping for increases to be capped at the inflation rate, but in a previous note I had mentioned that increases would be at around 10% or just below. Nevertheless, the increases are a bitter pill to swallow as higher electricity costs will be a further blow to the already subdued growth outlook. SA is effectively financing the power utility’s inefficiency and corruption. Eskom, which had applied for increases of between 15% and 17% over the next three years, is still left with a shortfall in revenue of R102bn.

SA GDP growth for the fourth quarter of 2018 was 1.4% quarter-on-quarter, slightly better than the market expectation of 1.2%, bringing full-year growth to 0.8%. Transport, government services and finance were the star performers. But agriculture, mining and construction stumbled. The mining and construction industries are now in recession, having recorded negative growth in two consecutive quarters. The ANC’s need to placate its trade union allies means that unpopular reforms such as selling off state companies and reducing the bloated state workforce remain off the table. Growth for this year is expected to be in the range of 1.3-1.5% and will remain entrenched at these low levels until some politically difficult reforms are implemented. 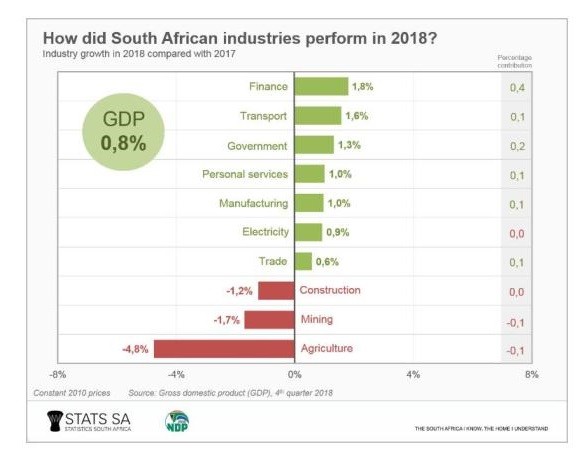